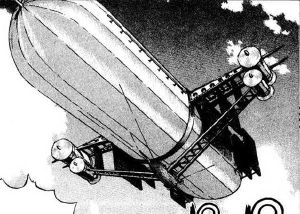 The international airship as seen in the manhwa. (The small ship itself is located beneath the blimp.

Airships, also known as skyships and flyships, are airborne vehicles designed to transport both travelers and goods across long distances more efficiently than traveling on foot.

Prior to Episode 10 in Ragnarok Online, an NPC offered warps to Juno. Once Episode 10 was implemented, the NPC was replaced with the airship transport system.

Each airship follows a linear route and doesn't divert from their established route. Unlike the airship from games like World of Warcraft, the airship in RO doesn't actually "dock" in each location but instead moves constantly back and forth on their route. Because of this, players going onto the airship may find themselves flying back to the very town they supposedly left.

Airship usage typically incurs a boarding fee of 1,200 Zeny, which can be waived with a Free Ticket for Flyship (compared to Ragnarok's airship fee which is 5,000 Zeny per passenger). Players switching between the domestic and international airships at the Juno layover will not be charged an extra boarding fee as long as they don't leave the airport.

The international airship is prone to monster attacks that reference the airship attack in the Ragnarok manhwa. Players may participate in defending the ship by helping kill the monsters or they may head below deck to wait out the assault. When under attack, the flight will be interrupted and won't continue to the next destination until the monster attack is over.

Although RO2 currently does not have an airship system, hints of its future implementation can be seen in the original login screen for the game. In addition, an airport exists outside Prontera's south gate so it can be assured players will be able to fly in and out of Prontera.

The airship seen in the previous login screen. (RO2)