Aldebaran (Korean: 알데바란) is a peaceful town that belongs to neither the Republic of Schwarzwald nor the Rune-Midgarts Kingdom. It was built on the border between both countries and is home to the Alchemist Guild. (In the English release of the manhwa, the city was mistranslated as Altevaran.)

The entrance, a beautiful canal that surrounds a clock tower, adds to the quaint environment of this small town. Aldebaran is famous for attracting Alchemists who wish to further research this strange science. It is also known for its beautiful windmills, as well as for being the home of the Kafra Headquarters.[1]

On iRO, the city's name is localized as Al de Baran. 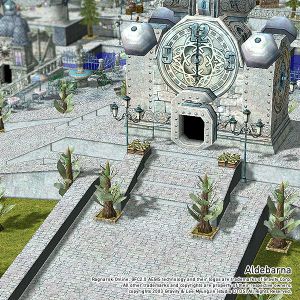 The Clock Tower in Aldebaran.

It is said that the promised land always lies on the other side of a wilderness. If any one city can testify to that, it is undoubtedly Aldebaran. To the north of the city lie desolate, rocky plains, while to the south is the unforgiving Mt. Mjolnir, a rugged mountain teeming with aggressive insects, plants, and beasts. However, situated in a basin between, the city of Aldebaran is a welcome respite for travelers heading north into the Schwarzwald Republic, or south into the Kingdom of Rune-Midgarts. A light, verdant, tranquil city of water, the city boasts a singular beauty and splendor that rivals even that of Lighthalzen.

Known as the city of canals, the majority of Aldebaran is indeed constructed around the waterways, using them for power, drinking water, and urban landscaping. In addition, a system of beautiful windmills dots the city's skyline, turning lazily in the mountain breeze. The scent of plant life, the crisp clean air, and the overall formal beauty of the city make it a well-known tourist city. It is here, also, that the Alchemist Guild makes its home, attracting many individuals from all over the world who wish to further research this strange science.[2]

The city itself, however, would not even exist were it not for the Kafra Corporation. Indeed, it was 1000 years ago that Kafra Corp. relocated its headquarters to the area, in such a way that it purposely rests on the borders of the Schwarzwald Republic, Glastheim, and Rune-Midgarts. Over the next one thousand years, the current city was built in gradual phases, reaching completion recently. Since that time, it has remained as an oasis amongst the rugged landscape... a god-send to all those too poor to travel otherwise... 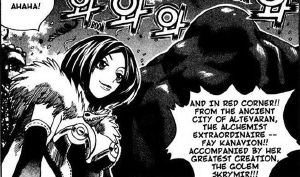 Fay and her homunculus.

It is unknown how long Aldebaran existed, but it was mentioned that it was an ancient city. It is possible that alchemy was at its infancy during the Age of Gods as it was seen as another form of magic and thus alchemists were allowed to participate in Geffen's triennial Tournament of Magic. As Prontera and many other cities at this time were big enough to span many, many miles, it can be assumed that Aldebaran was also significantly huge.