Amatsu is a mysterious island of strange culture and customs. It is accessible by way of ship from the port of Alberta.

Amatsu consists of a town, a field, and three dungeons. The town of Amatsu consists of blooming cherry blossoms and Japanese style buildings. Northwest of the town is the Lakeside Castle—an ancient five-story structure. Rumor has it that there is a secret entrance into the castle that leads to a mysterious dungeon.

In the middle of the field, you will find a shrine half sunken under water. The shrine resides in a forest of bamboo, pine, and cherry trees, making it a famous tourist spot to visit.

Once long ago, sailors from Alberta told an interesting tale.

The tale was about a seaman who suffered through a violent storm. His ship was badly damaged and drifted farther out to sea. The ship drifted aimlessly until it eventually washed up on a foggy, hurricane-riddled land. The seaman decided to explore. He had never seen a land like this before. As he wandered all over the island, he saw that this was a very exotic place, full of strange plants and odd-looking houses. 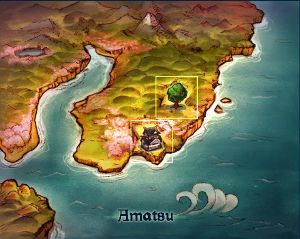 World map of Amatsu as seen in RO.

Locals living on this island immediately noticed the lost stranger. Feeling pity for the stranger they offered him food, water, and shelter. After some time had passed, the seaman was able to repair his ship and return to his home of Alberta. Years later, after he had passed away of old age in his home, villagers found his nautical charts aboard his old ship. The charts kept account of his journeys, describing the mysterious island, and showed the nautical route to the island and the dangers that awaited those who dared to adventure there.

The charts were copied and brought to Tristan III, the King of Rune-Midgarts. King Tristan Gaebolg III announced to his people that if anyone who could gather more information about this land, he would be well rewarded. Since then, many adventurers and brave captains alike have ventured into the sea to discover more information about this land. Of these, all have failed. One day an adventurer from the mountain region of Payon, took a ship and headed toward the island alone. Others paid no mind to this adventurer, as they didn`t believe someone who lived in the mountains had a chance of surviving at sea. The adventurer experienced harsh storms and choppy waves on his voyage, but reached the new land and studied it carefully. After researching the land for some time, he proudly came back with a documented account of his travels. King Tristan III congratulated him on his success. The route that the adventurer took eventually became the official passage to this island.

Over time, people became familiar with the exotic culture of the island. As they learned more about it, they learned of its name, Amatsu. They also discovered a castle to the east named, "Lakeside Castle." This new discovery encouraged many adventurers, who had become weary of the Emperium Wars and the Heart of Ymir, to start adventuring once again.

Official trade opened between Rune-Midgarts and Amatsu and as trading flourished, both cultures began to adapt to each other.[1][2]