Archbishops are capable of Healing and buffing an entire party using their skills and their Holy magic skills cover a wider area than a Priest or High Priest can. These Holy servants are the Priests who went on pilgrimages to Odin's Shrine seeking more power to maintain the peace on Rune-Midgarts.[1]

The Holy War was over, but the High Priests were still sensing an ominous energy that loomed over the continent. They prayed that Odin's grace would grant them greater power to fight this evil.

The servants of Odin finally realized that merely "protecting peace" wasn't enough to save the world. Some of the High Priests embarked on a long, perilous pilgrimage to an ancient temple at the end of the continent to seek greater power through the essence of holiness.

A long time had passed since these priests left on their pilgrimage, and only one priest returned home from the temple. Before his death, he told the others that he and his comrades had found new enlightenment and then gave them the Holy Grail.

The Holy Grail shone with brilliant light and still held a few drops of its miraculous water. The leaders of the church kept the Holy Grail in the most sacred place in the church as they tried to decipher its secrets.

The news of the discovery of the Holy Grail spread around the world and attracted flocks of people to the church. Many curious visitors wanted to appreciate the Holy Grail and see it with their own eyes. Others, however, planned to steal the Holy Grail for themselves. In response to such threats, the church formed a group of special priests called the Archbishop whose duty was to protect the Holy Grail.

These followers of Odin use their holy power to repel pagans and non-believers, believing that the Holy Grail would eradicate evil and restore the world's peace as soon as its secrets were revealed.[3]

As worshippers of Odin, only Normans can become Archbishops. 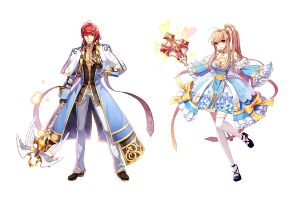 Archbishops can only equip gear designated as:

Archbishops can utilize the following weapons:

The Archbishop is capable of Healing and buffing an entire party by using skills like Heal and Increase AGI and their holy magic skills cover wider areas than Priests and High Priests, whose skills are limited for use on individual characters. Archbishops are well-rounded they can act as both healers and damage dealers in a party with their new Holy magic attack and complementary combat skills. The Archbishops' signature skills include High Heal and Renovatio, whose effectiveness is on a much higher level compared to existing healer skills.[4]

Archbishops are the highest tier on this job branch and cannot advance any farther.