The Assassins Guild is a group of Arabic-inspired warriors dedicated to preserving the balance of power within the entire continent. The Assassins Guild's modus operandi is to swiftly and brutally kill off anyone who threatens to give the Aesir, Vanir, or the giants a foothold in Midgard. Their rationale for doing this is that by keeping Midgard a "no man's land" for the gods and giants, it will stop the mortal realm from becoming their battlefield. The policy doesn't exactly make them friends with anyone.

The guild is led by the guildleader who is tasked with upholding the guild's modus operandi in order to keep Midgard from being embroiled in another war with the gods and giants. Exceptional members of the guild become known as Assassins of the Cross and are marked with a distinct symbol to distinguish themselves from other assassins. They typically leave the guild to pursue their own ambitions. (Of the seven Assassins of the Cross, only Loki chooses to remain with the guild.)

In addition to the main headquarters in the Sograt Desert, a second branch of the Assassins Guild was established near Veins. It is unknown how long the Veins branch has been around for.

The guild existed for about 500 years during which the Assassins Guild headquarters, the Sandstorm Fortress, was once located to the right of Morocc in the midst of the Sograt Desert. 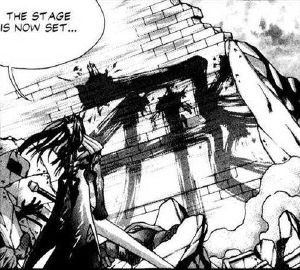 Sakray paints the word for "flight" on the ruins of the Assassins Guild.

Around A.W. 997, the Assassins Guild was attacked by Sakray and most are slaughtered by the cursed swordsman. During this time, the Assassin Elder was killed as well, fracturing the operational stability of the guild. The only remaining members of the guild were assassins who were not at the headquarters at the time of the attack. The survivors are eventually stationed at the guild headquarters to rebuild and recover from the heavy loss of the guildleader as well as the Guillotine Cross division.

Some time later, the Assassins Guild headquarters was rebuilt on a small island to the southeast of its original location. Its membership have grown to large numbers since Loki left to pursue Chaos. Although the headquarters is no longer protected by a sand cyclone, the Sandman monsters that populate the area serve as a decent replacement to deter unwanted trespassers. Despite this, the guild still faced instability with a less experienced guildleader and the lack of the Guillotine Cross task force.

After Surt was freed from his prison, the guild saw a resurgence of the Guillotine Cross division in the guild; a sign of the guild's full recovery from Sakray's attack.