Ayothaya is linked by an ocean lane to Amatsu and Kunlun, and it was only a matter of time before it would be found by the intrepid adventurers of Rune-Midgarts. There, the explorers found a people adhering to a religion which glorifies nature and stresses harmony with the earth and its peoples.

On iRO, this place is misspelled as Ayotaya.

Rune-Midgartsians were first attracted to Ayothaya for its shrines of gold and emerald, but later found themselves charmed by the quaint houses built just above the quiet waters, and the listlessly floating fishing boats selling fruit, fish, and the deliciously unique cuisine of Ayothaya.

The Ayothayans are a devoutly religious people that believe in living peacefully with nature as well as their fellow man. It is no wonder that the Ayothayans found no trouble in accepting strangers and outside cultural influences. Many warmly welcome visitors from Rune-Midgarts.

But, despite the veneer of warmth and tranquility, there lay a dark secret amongst the residents of Ayothaya. A dreadful folk tale passed in secret from person in person. Somewhere in the ancient ruins nearby roamed a terrifying creature known to feast on Norman flesh. The whispers of this mysterious beast eventually reached the ears of adventurers from Rune-Midgarts who grew intrigued by this legend. Gradually, these adventurers became obsessed with the desire to explore these ruins and learn the truth about this legend for themselves...[1]

Ayothaya is situated right on the ocean. 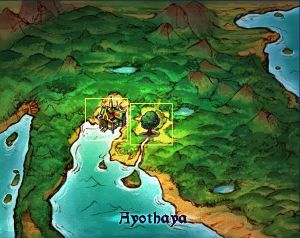 World map of Ayothaya as seen in RO.

After the sovereign cities of Amatsu and Kunlun were discovered, the coffers of the Rune-Midgarts Treasury began to fill as the trickle of profit from foreign commerce grew into a torrent of zeny. Rune-Midgarts' wise and benevolent ruler, King Tristan Gaebolg III, was pleased.

Recognizing the profit from exploration, King Tristan III proclaimed that pioneers that discovered previously unknown lands would be richly rewarded. While honoring those who chose to live their lives as adventurers, he also shrewdly encouraged them to seek out new lands.

One fortunate adventurer has answered the king's proclamation and discovered a new addition for the maps of Rune-Midgarts. The village of Ayothaya has been the recent subject of all the talk within the Rune-Midgarts Kingdom.[2][3]