Bards are traveling musicians with the ability to perform magic through song. They can partner up with Dancers to initiate powerful spells.

Bards are only available in Ragnarok Online.

At a leisurely break, the Bard especially likes to sing and finds their calling in poetry. The song he was singing grew more and more, and he finally acquired magic power. When he sang, the flora became silent and beasts gathered near him, listening to his song and gently keeping quiet. The sound of his powers spread widely and finally entered the ears of King Tristan III of the Kingdom of Rune-Midgarts. The King invited him to listen to his song and be impressed and asked him to join the ranks of the adventurers.[1]

Only male Normans can become Bards. 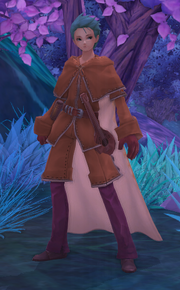 The Bard costume as seen in RO2.

Bards can only equip gear designated as:

Bards can utilize the following weapons:

Bards can go on to become a Minstrel or transcend to Clown.