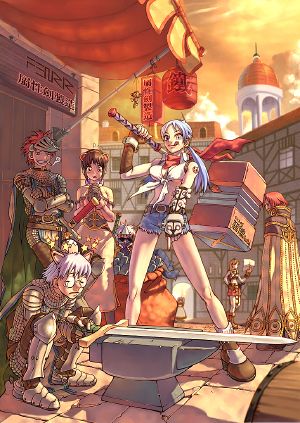 In RO, Blacksmithing has success rates which scales with the level tier of weapons and skill level for ore processing. Typically, low level weapons have a higher success rate than high level weapons. Investing stat points into DEX and LUK will increase forging success rate in general in addition to forging equipment and job level.

When forging a weapon there are 3 available slots for modifying items. Items such as Flame Heart, Mystic Frozen, Rough Wind and Great Nature can be used to imbue the weapon with the Fire, Water, Wind and Earth properties, respectively. A weapon may only have one element at a time and using more than one elemental stone will cause the forge to fail. Slots may also be fitted with Star Crumbs.[1]

Unlike Alchemy and Cooking, Blacksmithing can be learned instead of requiring manuals in order to forge. Simply investing points into the Blacksmith class's various passive skills will unlock the recipes.

Processing recipes require a Mini Furnace to forge. The furnace is consumed during the forging process.

Level 1 Weapons require an Iron Hammer to forge. The hammer is consumed during the forging process.

Level 2 Weapons require a Golden Hammer to forge. The hammer is consumed during the forging process.

Level 3 Weapons require an Oridecon Hammer to forge. The hammer is consumed during the forging process.

Blacksmith Ranking is a system exclusive to RO in which players are ranked based on who can forge the most weapons.

Blacksmith Ranking can be checked via usage of the "/blacksmith" command in-game. A weapon created by ranked Blacksmiths will deal an extra +10 Mastery ATK damage.