The Cat Hand Group, also known as the Cat Paw Merchant Association or Cat Hand Commerce Group, is a group of doram cats that seek to do business with Normans. Known ships in their merchant fleet include the Nabeeho and the Con-Chilina.

Cat Hand Group was originally funded by Tomatomas, Peperoncino, and Gamberi after having founded the Vigilante Corporation to help aid the failing town of Lasagna. The group initially started with only a leaky trading ship, but eventually grew into a fleet of merchant ships. Admiral Tomatomas and Captain Gamberi led the Cat Hand Group while Peperoncino took lead of the Vigilante Corp and protection of Lasagna.[1]

The Cat Hand Group made their first appearance in Jotunheim, since their services were unneeded in Midgard as the Kafra Corporation and the Zonda Corporation all but monopolized the warp and storage services in that realm. Unfortunately most of the Sapha natives are not as accepting of cats as they are of normans and so the Cat Hand Group has been forced to offer their services outside of Sapha settlements.

It turns out that the Cat Hand Group set out from Lasagna with several merchant ships to find a new trading route. During the fleet's voyage, a powerful storm came upon them and caused many of the ships to sink from the sheer force. Only one ship, the Nabeeho, managed to survive the storm and crash-landed upon a mysterious island. With no way off the island, the cats of the Nabeeho settled in and called their new home Malangdo.

Eventually, the Cat Hand Group was rescued by their fellow Dorams and are now able to leave Malangdo at will.[2] Members of the group were later found at Verus City to answer Rekenber's call for excavation recruits.[3] 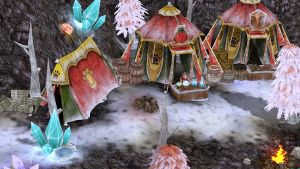 The Cat Hand encampment outside of El Dicastes.

Just like the Kafra Corporation and the Zonda Corporation, the Cat Hand Group also offers save, Storage, and teleport services. However, in order to access these services, adventurers must earn credits with the group by either fishing or mining in Jotunheim. The more credits earned, the more services offered.

Adventurers that have yet to earn credits can make use of the Cat Hand Group's teleport services from the Midgard Allied Forces Post to Splendide, Manuk, El Dicastes, and Eclage in exchange for either Zeny or Malangdo SP Cans.

The Cat Hand Group is most notable for its Hidden Enchantment services, which are offered for certain gears on the outskirts of El Dicastes and on Malangdo.

The Cat Hand Group offers a variety of products in addition to their services. The following can be purchased from Cat Hand Group agents stationed in certain locations: