For the debuff status, see Confusion.

Chaos (Korean: 케이아스) is a Rune Knight who has no memory of his childhood. Despite his troubled past, he is a relatively good-natured young man who is somewhat clueless about romantic relationships, particularly with Iris Irine. He also is a very loyal friend, including to the very reticent Loki.

Chaos knows a number of sword skills and is not well-versed in the ways of magic (at all). 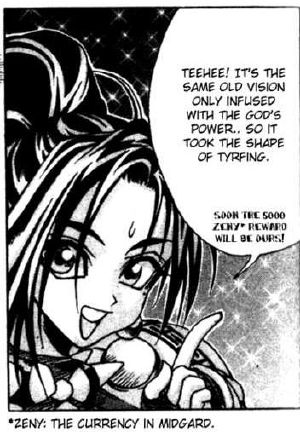 A common misconception is that Chaos' sword is called Tyrfing when in reality it's called Vision. This is due to the fact that Iris once enchanted Chaos's sword Vision to take the form and strength of Tyrfing. As the enchantment is temporary, Chaos' sword eventually reverts back to its normal form.

Chaos is first seen hunting monsters with his best friend, Iris. Their main aim are Faceworms, giant worm monsters whose fangs have a bounty of 5000 zeny. After a few hurdles, Chaos and Iris were finally able to slay the monsters they were after and proceed to collect the fangs to turn them in. They arrive in Alberta where the reward office was located and were robbed of their biggest fang by Lidia before they could collect their bounty. They manage to negotiate the fang back, but at the cost of having Lidia following them around in their travels for the chance to steal Iris' legendary dagger.[1]

Chaos later returns to Payon, where he has lived for the past few years.[2] When Fenris Fenrir arrived in Payon, Chaos learned that he was the reincarnation of Baldr, the God of Light. Soon after, the village was attacked by the valkyrie Sarah in addition to the cursed swordsman Sakray. In a desperate attempt to protect everything he held dear, Chaos somehow manages to summon the great dragon Nidhoggr and the village of Payon was leveled to the ground.[3]

After managing to escape Nidhoggr's attack, Chaos is greeted by his mother Frigg, whose soul is bound to Nidhoggr. His subsequent conversation with her convinces him that he was indeed the reincarnation of Baldr and it was his destiny to bring Ragnarok to fruition.[4]

He, Fenris, and Iris then travel to Prontera where he is attacked by the assassin, Loki. The fight damaged parts of the city, which prompted the Knights of Prontera to intervene.[5] Chaos and the other are thrown into the castle dungeon.

In a flashback, Chaos recalls he once lived in a village where he was named Vermilion for the color of his hair. During an event in which a large number of people were slaughtered, he was found by an unnamed dragon knight who taught him the ways of the sword. It was then he was renamed Chaos for the situation he was found in.[6]

Meanwhile, the valkyrie Himmelmez unleashes her attack on Prontera. Loki breaks Chaos and the others out of the dungeon in order to help him combat the threat.[7][8]

With the defeat of Himmelmez and the witch Bijou, Chaos, Iris, Fenris, and Loki take an airship with the intent to check out the great library at the city of Juno. On their way, they were attacked by Arkana and her wyverns. The airship subsequently crash as a result of the onslaught, landing Chaos and the others near the mage city of Geffen.[9] There he encounters Sakray, who kidnaps Iris and holds her hostage in order to lure Chaos to him.[10] Chaos tracks down Iris and Sakray in the Geffen Tower where he defeats the cursed knight at great cost to his own health.[11]