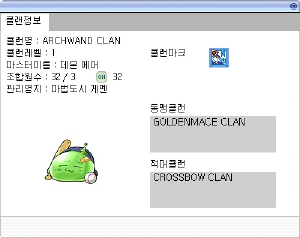 The Clan window in kRO.

Players that join Clans are unable to participate in War of Emperium and can be expelled from Clans after two weeks of inactivity.[1]

Adventurers all over the Rune-Midgarts Kingdom who had nowhere to go began to gather with those of similar potential. As such, clan masters set themselves up in Prontera to build a network of information with other adventurers.[2]

There are currently 4 Clans for players to join. You do not have to be a job class related to a clan in order to join it (i.e. a Priest class can join the Sword Clan). Each clan has its own clan emblem and special set of buffs. More Clans may be added in the future.[3]

Players can sign up for a clan via Clan Master NPCs in Prontera. They are located inside the building at /navi prontera 136/186, which has been re-designated as the clan hall.

Being a Clan Member[edit | edit source]

After joining a clan, players can access the clan window by pressing Ctrl + G. To talk to fellow clan members, type /cl or /clanchat into the Chat Box to activate clan chat.[5] The /cl command works the same way as % for party chat and $ for guild chat.

Once in a clan, players can take on special clan-exclusive quests and instances to earn certificates.