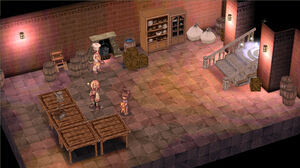 The road to culinary greatness starts in the Prontera castle.

The Cooking system is a crafting system in Ragnarok Online that allows players to cook foods and mix drinks that can do a range of effects from recovering HP and SP to boosting stats. Players wanting to cook in RO must be at least level 50 and complete a special quest in order to craft food.

NOTE: Because a Chef Hat is required to start the cooking quest, Novice and the Super Novice battle jobs are restricted from cooking.

In order to cook in RO, players must have the following:

Like other crafting systems in RO, cooking also has a success rate. It is affected by:

Players can craft foods that give anywhere from +1 to +10 to any single stat. There are foods that can give +20 to any one stat, but those recipes are exclusive to the Geneticist job class.

Cooking kits are necessary catalysts in order to cook. Only by double-clicking a cooking kit is a player able to bring up a list of possible dishes that can be created with the items and recipes (cookbooks) in the player's inventory. However, just like the Blacksmith's hammer during weapon creation, the cooking kit is consumed during cooking.

The following can be obtained from Madeleine Chu in the Prontera Castle's kitchen:

The rest of the cooking kits can only be obtained from monster drops:

There are 10 cookbooks in all. The following can be obtained from Charles Orleans in exchange for certain ingredients:

The rest of the cookbooks can only be obtained from monster drops:

In addition to the default cookbooks, players can also obtain special recipes. Unfortunately, the Mix Cooking Cookbook can only be used by Geneticists so players want to make a full-fledged chef character will have to roll a Geneticist.