Crusaders are more built for shield usage and have the ability to use Holy magic such as Grand Cross and Sacrifice. As such, they serve the Prontera Church and seek to protect its clergy from the evils of the world.

After the establishment of the Church of Odin, Crusaders were founded to help protect those who are devoted to Odinism. They aid members of the church in eradicating demons and evil spirits from the world.

From youth, disciples who have been trained for the sacred war within the temple begin their activities with a terrific power. Unlike many other writings, for those who swore allegiance to Odin and not the king, any suffering is considered to be one way to Odin; punished by death and fire. In the midst of all crisis, they did not forget to worship Odin, and their humility allows them to turn all their good deeds into godliness and enable them to use the power of miracles from the gods. Particularly good at shielding combat, they have a natural knack for defensive abilities, able to lead and break through critical situations. In accordance with the adventure recruitment announcement by Tristan III, King of Rune-Midgarts, Crusaders will take the adventure to raise the name of the Knights of the Rune-Midgarts and to recruit others to prepare in the temple like themselves.[1]

Crusaders are known to be Normans, as they were established by such. 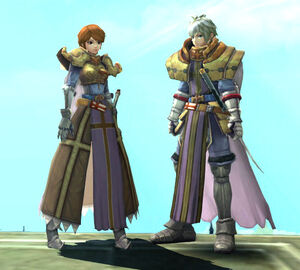 The Crusader costumes as seen in RO2.

Crusaders can equip gear designated as:

Crusaders can utilize the following weapons:

Crusaders can move on to become Royal Guards or transcend to Paladins.

Crusaders have exclusive mounts designated for them. Unlike other classes, Crusaders can attack from their mounts. The main mount is the Pecopeco, although Crusaders can later gain access to the Gryphon.