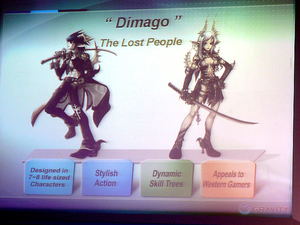 Concept art of the Dimago.

Dimagoes are a Demon-like race that result from a union between a Colossus and a Norman. They have fallen into an enchanted sleep and possess no memory of their lives before their slumber.

At the very beginning of Midgard, evil giants called the Colossus reigned over the planet with an iron fist. Normans revered and despised them because of their cruelty as masters. Only one race was courageous enough to stand against the Colossus—the Dimago. Born between the unthinkable union of Colossus and Norman, the Dimago was also hated by Midgardians. However, it was their sacrifice that made it possible for the Normans to eventually take control of Midgard once again. After the Colossus fell, the Dimago mysteriously vanished. Rumors spread around that they were all slumbering in an ancient and secret castle called the "Cradle".[1]

Dimagoes have the general appearance of Normans but with greyish-white skin and long, narrow Elf-like ears. A pair of horns adorn their heads and their backs. When angered, they change into their true form known as the Dimago-Verein.[2]

Dimagoes possess different fighting styles and make use of dynamic skills. It is unknown if they have job classes or professions because of this. 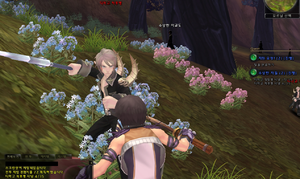 The Dimago as seen in Legend of the Second.