Elements are properties that can strengthen, weaken, or nullify attacks when they interact. Every player and monster in the Ragnarök game series has an element and, with the exception of the neutral element, every element has both strengths and weaknesses to other elements.

The term "element" is often used interchangeably with "property" and "attribute".[1]

In RO, there are ten different Elements. Some attacks, such as the melee attacks of monsters, have no element and are completely unaffected by elemental modifiers. Such attacks are referred to as being non-elemental.

Monsters have only a defending element, but can inflict elemental attacks using skills. 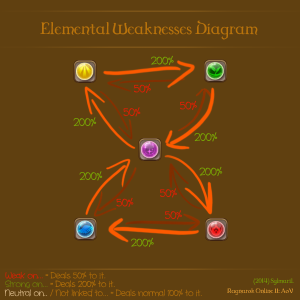 Originally, RO2 Elements mimicked that of RO in that monsters were attributed elements similarly to RO Elements (water, earth, fire, wind, poison, saint, dark, psychokinesis, and death). Despite Elements being part of the game's programming since launch, they were never actually enabled in the game. With the Advent of Valkyrie update to RO2, every monster in the game now possesses one of 5 different Elements.

Unlike RO where elemental weapons can be found, RO2 has it so element fragments drop from monsters. Using these fragments on weapons will permanently enchant the weapon into a specific element. Since inventory space is a major issue in RO2, a special element fragment can be acquired to remove an element from a weapon, allowing players to change the element of their weapon at will.