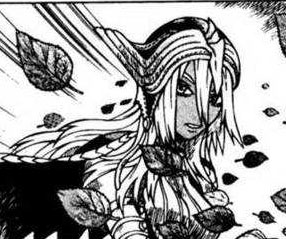 Reina threatens Chaos and the others.

Elves are the main race of Alfheim. They are advanced in the ways of culture and civility and have very long lifespans.

The elven race pitied the primitive Normans and sought to help the race advance by teaching them the ways of their people. So proud and almighty were the elves that they failed to notice signs of rebellion from the Normans. One elf sage name Vanar foresaw the fall of his people and used his knowledge of magic to forge the Orb of Vanar in order to save the elven race. But his orb came too late, as the Normans allied with the dwarves to overthrow the elves and take over the kingdom of Geffenia that the elves established on Midgard. As a result, the remaining elves scattered to the far reaches of Midgard, but not before a powerful magic locked their world away from the Normans. Their numbers dwindled over the years and are now on the verge of extinction.

During the battles of the Day of Despair, the elves absorbed demonic energies as they fought alongside the Normans. The elves' reliance on the magic of Yggdrasil, now tainted, caused them to eventually mutate into Noels. 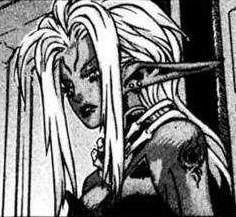 Elves consist of two subraces: dark elves and light elves. Dark elves have a very medium skin tone with long pointy ears that extend out the sides of their humanoid heads. They have a slender appearance and may possibly be taller than Normans. Not much is known about light elves at this time.

It is unknown exactly what job classes elves are capable of, but it is assured that the job classes of Magician and Archer are familiar to them at least.