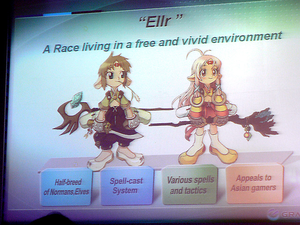 Ellrs are a race that are half Norman and half Elf that reside in Alfheim. They revere a "Mother Tree" and have the ability to travel to Midgard.

After participating in the war between the eastern and western Normans, the Ellrs went home to Alfheim. When their "Mother Tree" fell silent, they returned to Midgard to investigate why.

Despite the interracial relation between Normans and Elves, Ellrs are oddly diminutive in height. They possess large ears that are horizontally positioned on the sides of their heads. Adding to their childlike appearance, Ellrs are doe-eyed with large pupils.

An Ellr's power comes from magical stones called "Stones of Ancestors." These stones influence their skills and, as such, the Ellr has no professions or classes.