Etran is a Donas Laphine who, along with Robert, helped established Eclage and successfully cultivated the Bifrost. He is unconfident and unsure of himself and what he believes in.

Thousands of years ago, Etran cooperated with Robert to establish the new home tree and the Laphine capital of Eclage in a far eastern portion of Alfheim on the Bifrost. Because the Elder Assembly held too much sway over the Laphine leaders and Mayor Jun, Etran and Robert pretended to fight with each other in order to get their attention. They succeeded and so the new home tree was planted and Etran began work to restore the land afterwards. After his death, he was buried in the southern portion of the field, over which the Bifrost Tower was erected. 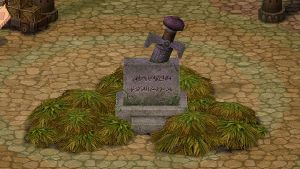 Etran's tomb within the Bifrost Tower.

One day, Etran was transported into the far future by an adventurer from that future. Confused at first, the adventurer explains that he/she is from thousands of years in the future and that a path between the past and present has been opened with the help of a rift reactor. The adventurer then asks him some questions. Etran explains how the Elder Assembly was a rotten group of Laphine relics who insisted on being involved in every Laphine affair from politics to culture. Their aggressive tactic to influence everything was a desperate effort to remain relevant in an ever-changing world. Etran and Robert refused to sit by while more young Laphines were sent to the south to scout forests and lose their lives, so they came up with the plan to pretend to fight each other in order to propose the idea of establishing a home tree and revive the Bifrost. They succeeded and a year after, Robert began cultivating the home tree while Etran began work to restore the Bifrost.

As time went on, Etran began losing confidence because he underestimated how much of the land's energy the home tree would absorb and how fast it would absorb it. The project relied on Robert staving off the home tree's rapid draining of the Bifrost's life force and Etran's ability to restore what the home tree has taken. The process was taking so long that Etran wasn't sure if either of them were doing things correctly. However, the adventurer tells him that the both of them succeeded. Etran is skeptical so the adventurer leads him out of the Bifrost Tower to see the fields for himself. Etran was awestruck by the sight before him, leading him to tears at the success of his work past his death. He then asks the adventurer what became of Robert's home tree, to which the adventurer responds that it, too, thrived. Etran wishes to see the tree, but the adventurer explains that due to the portable rift reactor's short range, it would not be possible. Etran starts to think that the adventurer was lying to him in order to make him not feel so bad about his side of the project succeeding. The adventurer then asks him what kind of proof would he need to believe him/her and Etran explains that a home tree that has thrived would produce golden leaves. He also asks the adventurer to give his necklace and a message to Robert as a favor. The adventurer takes the necklace and Etran fades back to his time.

The adventurer eventually recalls Etran back to the future, who was very delighted to meet the norman again. After a few questions from the Donas Laphine, the adventurer gives him the leaf he asked for as well his necklace back. Seeing this, Etran is overjoyed to know that Robert has succeeded in growing the home tree. However, he is disappointed that Robert gave back the necklace, to which the adventurer passes on Robert's message. Etran comes close to tears upon hearing that, expressing that Robert is a strong person and this was the first time he's ever said he trusted him since they started working together. He thanks the adventurer and decides to give his necklace to the adventurer instead as thanks for instilling in him the confidence he needed to complete his project. He then bades farewell and heads back to his time.[1]