Geffenia is a legendary kingdom of elves that was lost to time. It is protected by the Orb of Vanar. Its capital used to be Geffen.

In the English release of Ragnarok, the realm was translated as either Alfheim or Thralgard.

Not much is known about Geffenia, but it is assumed it was ruled by one king. 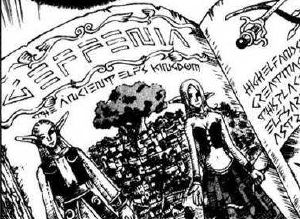 In ancient times, when Normankind was in its infancy, the immortal elven race taught Normans the basics of language and survival. The prosperity and peace of Geffenia made the elves ignorant of normans' ambition and in time the normans allied with the dwarves to invade Geffenia. All elves who managed to survive the onslaught were driven out of Geffenia and scattered all over Midgard.

In response, the kingdom of Geffenia was sealed and cut off from the world. The elven race is now on the brink of extinction. Since then, adventurers from all over the world seek to find this mystical place.

During the Age of Gods, Geffenia was rediscovered by Lidia who was accosted by Reina for stepping foot upon its sacred grounds.

In Ragnarok Online, Geffenia is accessible from the Geffen fountain, much like how it was accessible to Lidia in the manhwa.[1] Players must complete The Sign quest in order to use the fountain.