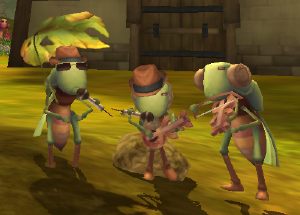 The Green Zeppelin in RO2.

The Green Zeppelin is a band of Rockers that travel around to various towns and villages to perform. They consist of Rort (guitarist and vocalist), GG (violinist), and Jones (vocalist). It's unknown how big their fanbase is (if there is one).

The Green Zeppelin makes its first appearance at the Elemento Academy, where they perform for the cadets there. Visitors Diana and Ano are big fans of the group and came to the academy to watch them.

Shortly after the betrayal incident at the academy, the Green Zeppelin heads for Bouquet Village. But they were soon accosted by fellow Rockers before they reached the village and had their precious possessions stolen from them. A kind passerby retrieves the items for them, whom they thank graciously.

They're later found performing at Izlude.