The Guillotine Cross strike fear into their enemies with their new incapacitating poisons, their improved evasion, and their skill at hiding from view. This class specializes in tricks and strategic diversion to throw their foes off-balance. Skills include weapon blocking and counterattacks: Rolling Cutter, which attacks all surrounding enemies; and Cross Ripper Slasher, a derivative of Rolling Cutter that can be used to attack distant enemies.[1][2]

It is known that the Guillotine Crosses were once a group of secret executioners in the Assassins Guild. Formed to maintain order in the guild and safeguard its secrets, they quickly and secretly execute traitors, deserters, and other members that were guilty of serious transgressions against the guild's rules. But the question is: why did this mysterious group resurface from out of the shadows?

No one knows for sure, but some speculate that they lost their home since most of the Assassins Guild branches were destroyed by Surt. It is also possible that the Assassins Guild has suffered from internal disputes and has now fragmented into factions that are warring against each other. Another angle is the emergence of the Guillotine Crosses also relates to the Rune Knights.

The dispute eventually led to the continental war in which countless lives were lost. Both the Rune Knights and the Assassins were willing to fight to the death to uphold the ideals of their organizations. The Guillotine Crosses were forced to completely reveal themselves during this war in order to ensure the survival of the Assassins Guild. They are now as infamous as the Assassin Crosses that represent the Assassins Guild.[3]

Only Normans can become Guillotine Crosses. 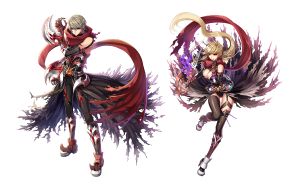 Guillotine Crosses can dual-wield (equip a weapon in each hand) and utilize the following weapons:

Guillotine Crosses are the highest tier in this job branch and cannot advance any farther.