Gunslinger are a solid distance job with a variety of fire weapon to use in battle like Revolvers, Gatling gun, Rifle, Shotgun and Grande launcher.

Entrusted with the most dangerous weapons of their time, Gunslingers fire at their enemies with smooth speed and unerring accuracy. These heroic gunmen are firearm specialists that methodically fight their enemies from long distances.[1][2]

Only Normans can become Gunslingers. 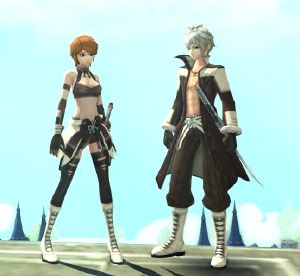 The Gunslinger costumes as seen in RO2. (Designs are actually based off the Ragnarok Scarlet version of the job class, not the RO version.)

Gunslingers can only equip gear designated as:

Gunslingers can use the following specialized weapons:

Gunslingers can move on to become a Rebel.