Hajatu the Spider is a member of the Assassins Guild.

Not much is known about Hajatu other than he can strike the most stealthily of any of the assassins and has the ability to summon sandworms to swallow up his foes. He appears to be very familiar with fellow assassin Ibraham as he tiredly notes how enthusiastically Ibraham is when he's killing. He apparently has fought alongside Loki before, acknowledging how the Assassin Cross removes his mask in order to perform a special attack.

On iRO2 and seaRO2, Hajatu is localized as Hazard.

Hajatu is the first to report to Loki that a strange ceremony takes place at the Morocc castle dungeons every full moon and involves children. That very night, he and the other assassins he was with infiltrate the castle. He takes down many of the guards by shooting out substances from the holes in his armor to summon sandworms. Once the sandworms have their fill, they shrink and return back to Hajatu's armor.[1]

During the battle in the castle, Hajatu manages to save a child while the others fought the castle lord, who had transformed into his true demonic form. He then saves Taulin after she was struck down by the castle lord.

About 300 years later in the Age of Man, Hajatu is reborn with the others.[3]

Although Hajatu does not appear in the game Ragnarok Online, the sandworms he employ are part of the game's environment. They were originally planned to damage players that haplessly wander into these exposed mouths, but the effect was never fully implemented. As such, players can wander freely into these areas without worry. 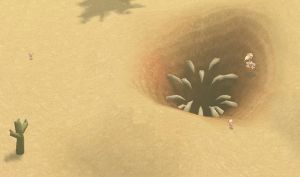 An inactive sandworm mouth as seen in the game.