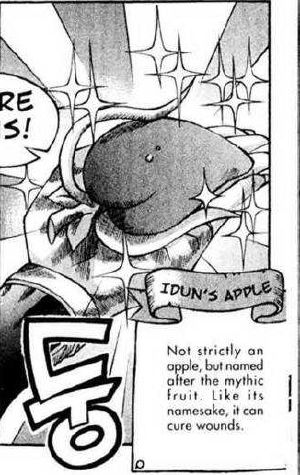 The fruit as presented by Lidia.

Idunn's Apple is a food item that is named for the mythic fruit.

This item is misspelled as Idun's Apple in the English release of the manhwa.

Idunn's Apple is a powerful fruit that has the ability to cure wounds. It made its first appearance in Volume 10 courtesy of Lidia. She uses it to heal Reina while she gives a weaker item, Idunn's Hound, to Ses.

Although the fruit exists in the game, it goes by the name Mastela Fruit instead.

In addition, there is a Bard skill called "Apple of Idunn" that increases the max hit points of all within range of its area of effect.