Izlude is the satellite town of Prontera and is home to the Swordsman Association.

King Tristan Gaebolg III built an arena to promote professionals throughout the nation. Even now, many skilled adventurers gather here to show off their talents.[1] 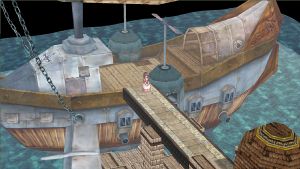 The airship docked in Izlude.

Izlude is located directly southeast of Prontera and functions as the capital's port of trade and as a first line of defense against naval attacks. It has docks for both water bound ships and airships, allowing adventurers to travel to Byalan Island and Alberta by sea and Juno and Rael by air.

Kafra agents in Prontera, Geffen, Payon and Alberta can provide warping services to Izlude for a monetary fee. By sea, Izlude can be reached by boat from Alberta for 500 Zeny, while Izlude is part of an airship route that travels to Juno, Hugel, and Rael.

Izlude was built to support Prontera's defenses and accommodate its burgeoning population. The Swordsman Association was once located within the walls of Prontera itself, but as the city's population boomed many Pronterans were forced to relocate to the more roomy Izlude.

King Tristan III later built the Izlude Arena to promote professional competition throughout the nation. Even now, many skilled adventurers gather here to show off their talents, collect rewards, and have their names listed in the arena's Hall of Fame.

Eventually, Izlude underwent a major renovation to accommodate a new training academy for Novices. The skimmer boat that was once docked at the northeastern part of the island was replaced with a ship that now offers trips to Pharos Lighthouse in addition to Byalan Island and Alberta. Bridge roads connecting Izlude to the mainland and the airship were expanded to accommodate the increase in traffic to the island as a result of the expansions. However, for some reason, much of the Izlude populace has moved out as a result of the renovations.

Izlude went through alot of damage over the next few hundred years, as the surface started to collapse and sink into the ocean. Izlude started to become a feast for the raging sea, as the settlers of the now proclaimed "Old-Izlude" needed a home, so they've decided to take to the hill side to relocate.[2]

Due to the growing threat from hostile Merpeople, the people of new Izlude began building fortifications around the town which eventually became the wall that can be seen upon visiting the town in current times.