Many ages ago, there was a powerful clan of shadow warriors who served the Lord of Amatsu. Content to be the right hand to the feudal warlord, they were known as the Ninja—silent assassins who excelled in weapon and magical arts.

In time, the Lord of Amatsu grew to mistrust their growing power and influence, and they were forced to retreat to the shadows they held so dear. These Ninja passed into the realm of legend, a fairy tale told to frighten small children.

Just recently the descendants of the original Ninja have returned to assist in the battle against the forces of evil in Rune-Midgarts, and have been gathering recruits to pass on their ancient techniques.

Until now, there have been no men or women strong enough in body and spirit to learn the most secret Ninja arts, those developed by the founding members of the clan so long ago.[4]

Only male Normans can become Kagerous. 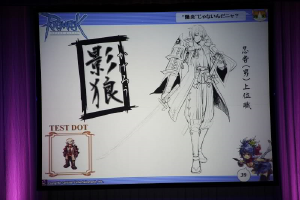 Kagerous can only equip gear designated as:

Kagerous can use the following specialized weapons:

Kagerous are the highest tier in this job branch and cannot advance any farther.