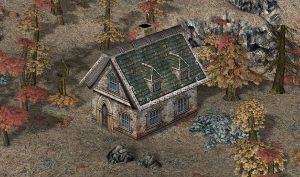 Kiel has been studying robotics since he was 20 years old and once lived in a run-down cottage near Juno. He eventually meets a woman name Ellisia at the river dividing Schwarzwald and Rune-Midgarts and immediately falls in love with her.

Some time later, Kiel discovers that Ellisia had fallen in love with James Rossimer, who belonged to one of the oldest and richest families in Juno. Desperate for her love, he sends her a letter asking to meet on the night of August 19. At the river where they first met, Kiel begs her to run away with him instead of James, saying that James had betrayed her by marrying another woman. But Ellisia insists that James never betrayed her and that he had promised to take her away with him that very night. In a fit of rage Kiel tried to take the ring James gave to Ellisia from her, but she fights back to keep it. Suddenly, the ground beneath them gave way from the rain and Ellisia fell into the river and subsequently drowned.

When her body was found the next day by a local fisherman, Kiel gives up all his money to buy the ring that fell from her body and runs away from Juno. He eventually settles in Einbroch where he opens a small store whose technology slowly grew famous. He then found the Kiel Hyre Foundation and became a well-known manufacturer of various machinery.

As time went by, a feeling vengeance for James slowly grew within Kiel. When Rekenber Corporation offered a merger with the Kiel Hyre Foundation, Kiel takes it without a second thought as he wanted James and his family to pay for Ellisia's death. Rekenber wanted Kiel to repair and develop their Guardians and from Guardian research, Kiel's work quickly shifted to the research of artificial life using knowledge from a certain Sage name Varmundt. His first generation of creations used completely mechanical bodies, and his first design was based on Ellisia herself. He didn't care that Rekenber used his robots to spy and kill as long as he was able to exact his revenge on James. In due time, the Rossimers went bankrupt and Kiel's wealth flourished. (It is unknown what became of James.) Kiel later sells his robot designs to Rekenber Corporation at a huge sum and he eventually becomes the company's main provider of robotic servants. Kiel later develops the Second Generation of his robotic creations and his "son" Kiel Jr. was the first robot created using a Condensed Magic Spells Scroll as a memory processor. He put Ellisia's ring into Kiel Jr.'s heart so that he would never forget what the Rossimers did to him.

Unfortunately, Rekenber decides to scrap the Second Generation as they were too faulty. The initial Condensed Memory Scrolls used for their processors were problematic and prone to errors. Kiel Jr. was the only Second Generation robot Kiel was allowed to keep. As a result, he becomes very attached to Kiel Jr. and teaches him everything about robotics. But since he didn't properly raise Kiel Jr. with Norman morals and ethics, Kiel Jr. grows selfish and acquires a desire to transform all the later Third Generation robots into killing machines. In response, Kiel put all the Third Generation robots into the Kiel Hyre Academy so that they could learn Norman behavior. The academy delayed Kiel Jr.'s plans, but he managed to succeed nonetheless.

While at his villa in the midst of the Elmes Plateau, Kiel learned that his son Kiel Jr. was trying to perform abnormal modifications on the students of the academy. He quickly writes a Letter to Elly and leaves a Steel Box for her to find in the villa's upstairs library.

When he met up with Kiel Jr., they have an argument and Kiel Jr. locks up Kiel inside the Robot Factory. There, Kiel remained imprisoned in one of the factory rooms until he hears a noise outside. When he asks if anyone was out there, the person responds that he/she was looking for him. Elated, Kiel replies that he is tied up and cannot open the door for the person to come in and get him. He instead slides a Metal Fragment under the door and implores the individual on the other side to deliver it to someone name Ellisia. He hears footsteps fade away and hopes that the person is successful.

Some time passes before Kiel is rescued by Ellisia, who takes him to his mansion in Lighthalzen. There, he met his savior who was a passing adventurer that had come to find out how to save Ellyja. Grateful for the adventurer's efforts, Kiel offers to answer any questions the adventurer has for him. Afterwards, he asks the adventurer to let him rest from his tiring ordeal in the factory.