Knights are more geared towards sword and spear techniques and are trained to endure larger amounts of damage. They mainly serve the king of Rune-Midgarts and are the first line of defense for the kingdom.

Prontera's Order of the Knights are the most well-known order of Knights in Rune-Midgarts. Many Swordsmen from all over come to Prontera in hopes of joining its ranks. Those who swear allegiance to the king and act only in accordance with the Knights have the ability to move at high speed on the Pecopeco. Swordsmen with a form of defense and physical attack more powerful than the threat of weak enemies to the king. Against the enemy, they set their arms. Fast maneuvers and the various physical attacking skills never before existed give them extraordinary ability to fight.[1] 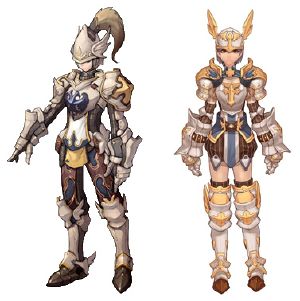 Normans are the prominent race to be bestowed Knighthood.

Knights are able to equip gear that is designated as:

Knights are able to utlize the following weapons

Knights can move on to become Rune Knights or transcend to Lord Knights.

Knights can be further customized through the Master Level System.

Knights have exclusive mounts designated for them. Unlike other classes, Knights can attack from their mounts. The main mount is the Pecopeco, although Knights can later gain access to the Ferus as a Rune Knight.

^The Ferus comes in 4 other colors, although the process to gain access to them is unknown.