Kunlun is famous as a tourist attraction for its beautiful scenery. In Kunlun, people believe in a unique religion, and the existence of a hermit who has absolute power over the limitations of Norman existence. The people believe that anyone can become a hermit, an absolute being. Thus they strive to improve their souls to that end.

Many inhabitants have become hermits, absolute beings. But, it`s common knowledge that there are evildoers among them who performed harmful acts even after becoming divine beings. Because of these malicious few, many horrible events began to take place. Neighboring nations near Kunlun were faced with a terrible predicament.[1][2]

NOTE: Some versions of Ragnarok Online refer to this place as Gonryun, which is the Korean word for Kunlun. 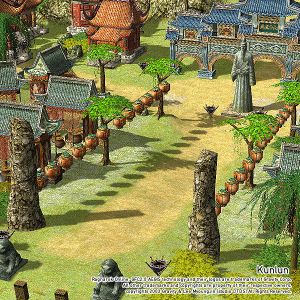 The main bazaar area of Kunlun.

Kunlun exists upon a giant rock floating high above the clouds.

The economy is run progressively by merchants. The economic power and information system of Kunlun is unmatched.[3]

An exotic looking stranger arrived in Alberta and was escorted to Prontera. King Tristan Gaebolg III came to learn about the culture from where he came. The King ordered sailors to find out more about this place. Through the efforts of these sailors, a sea passage was opened. This sea passage is now traveled frequently by many people throughout the land.[4]