Lee Myung-jin (Korean: 이명진) is a Korean manhwa artist.[1] His work Ragnarok was adapted into the game Ragnarok Online by GRAVITY Corp. This game later inspired an anime that he also helped author.

Lee Myung-jin was born in South Korea in 1974 and graduated from Holy Child Catholic School, Seoul with a degree in Visual Design. In 1992 he began work on his first manhwa series, It's Going to be a Wonderful Night, which ran for 4 years (nine volumes) and won him the distinguished Champ Super Manhwa award from Super Champ, South Korea's top manhwa publisher.

In August 1995 he put his artistic career on hold to serve his mandatory two years in the South Korean military. Upon his return, he formed his studio Dive to Dream Sea and began work on Ragnarok (for Champ Comics), one of the top-selling manhwa of all time. Expanding upon his epic fantasy, Lee has also become involved in the creation of Ragnarok Online, a game that takes the RPG analogies and rules of his manhwa series to the next level. With concepts taken from his own series, there are multiple players, worlds, and enemies to control, attack, and rule, with character designs and scenes somewhat reminiscent of Final Fantasy. The game is in its finished form and has been distributed in over 100 countries by Korean online game makers GRAVITY Corp.

A series of promotional comics drawn for Ragnarok Online.

In 2004, Ragnarok achieved a new milestone, becoming the first Korean manhwa to inspire a Japanese anime series. Based on the character designs and sensibilities of the online Game, Ragnarok the Animation was given a 26 episode series that was broadcast on TV Tokyo.

Some time after GRAVITY was bought out by Samsung, Lee became the company's investor relations executive director.[2] Lee later became the art director for Bluestone Soft, a brand new studio based in Korea.[3] His more recent ventures include becoming the CEO of Haotoon Co. Ltd., which launched the Chinese web comic platform haotoon.cn earlier in 2016.[4] 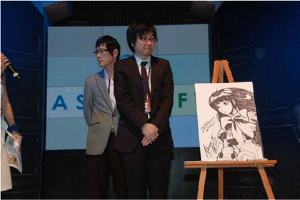 Lee at a convention in Singapore in 2007.

In 2010, GRAVITY began adding manhwa-related content into RO, much of which was declared to be authored by Lee Myung-jin himself. Content for the sequel game Ragnarok Online II is also claimed to be authored by Lee as well. It would seem Lee plans to continue the story of the manhwa in both RO and RO2 as it appears the manhwa itself is doomed to never continue past Volume 10.