Loki (Korean: 로키) is the most powerful member of the Assassins Guild and one of the seven Assassins of the Cross. He is apparently totally devoid of emotions (though there is some debate on this topic) and has a hard time fathoming them in others.

Loki's Sword of Shadows has the ability to become a sort of hook-shot, allowing him to latch onto rough surfaces and swing to unreachable places or dodge attacks. It can also be thrown like a normal dagger.

He wields "The Might" ("Cosmic Energy" in the English release), the most powerful form of magic in the world, and has been described as "the one who is norman and not."

About 600 years ago, Loki accompanied Julianna Lucille to a gigantic tower in the Schwarzwald Republic. There they discovered that demons of Muspell were using the tower to emerge into Midgard. Loki goes to investigate the tower while Julianna and the other assassins aide the Prontera Chivalry in countering the demon threat. It's unknown what became of Loki afterwards.

Many years later, Loki is seen scouting a castle in the town of Morocc. He and several other assassins noticed that groups of children were seen going into the castle and not coming out for about a year. Suspecting dark intentions, Loki and the assassins infiltrate the castle in the dead of night. 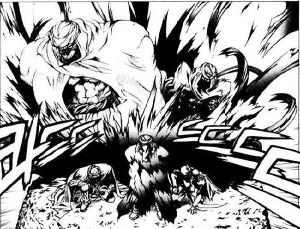 Loki and his team of assassins. From left to right: Hajatu, Mustafa, Ibraham, Taulin, and Loki himself.

Loki and his fellow assassins soon discover that the castle lord has been sacrificing children in an attempt to free Surt from his prison. They manage to save whatever children were left, but not before the castle lord reveals himself as a minion of Surt. A tough battle ensues in which Loki and his assassins were victorious.[1]

After Surt broke free from his prison, Loki entered a Dimensional Gap to find one of Yggdrasil's guardians. He ended up in the Forest of Mist where he met up with a wandering adventurer. After introducing himself, he asks the adventurer for help looking for the guardian as he was having trouble tracking the guardian down. He disappeared and eventually comes upon the guardian Nidhoggr already knocked out by the adventurer he met earlier. He thanked the adventurer for calming the dragon down and said to meet him in Mora later while he waited for Nidhoggr to wake up.

Some time later, Loki and Nidhoggr make their way to Eclage where they discover that the adventurer they met before has been thrown in prison for attacking the Laphine soldiers there. They tell Minuel that they don't believe the adventurer could ever do a thing and the Laphine agrees to take the adventurer to the clinic for them to confirm their beliefs. In the clinic, Loki reveals that the adventurer had been inflicted with a thorn that caused him/her to hallucinate the Laphine soldiers as incarnations of Surt. Loki goes on to reveal that Shinaim has been manipulated by an incarnation of Surt that is able to control others through a part of its body. Nidhoggr also agrees with Loki that the adventurer would never do a thing like that if he/she was fully aware of his/her surroundings. Unfortunately, someone needed to take responsibility and Loki admits that person has to be the adventurer. Hisie wonders what Loki and Nidhoggr will do now and Loki explains that they've been trying to track down Surt and that this latest clue will help them.[3]

Loki and Nidhoggr eventually track down Surt with the help of the adventurer and chase after him to put an end to the demon god's reign of terror.[4]

Loki had never even been wounded twice in combat before encountering Chaos. When the Assassins Guild was almost totally destroyed by Sakray (who had framed the act on Chaos), Loki hunted Chaos down in Prontera and attacked him. The ensuing fight caused so much damage to the surrounding area that the knights of Prontera stepped in to arrest them all. Not one to surrender so easily, Loki was quick to dash away.[5]

When Himmelmez commenced her attack on Prontera, Loki took it upon himself to retrieve Chaos, Iris, and Fenris' weapons and break them out of the Prontera castle dungeon.[6] He teams up with Chaos to take down the invading hordes of undead and eventually face off against Himmelmez herself. Even though the two of them managed to defeat the valkyrie, they were unable to kill her as Sarah swooped in to deliver the final blow herself.[7][8]

After recovering from the battle of Prontera, Loki joins Chaos and the others aboard an airship destined for Juno. On the way, they were attacked by Arkana and wyverns, causing them to crash land near Geffen. He was separated from Chaos and Fenris and takes it upon himself to lead Iris and newcomer Lidia to Geffen.[9] There, they were reunited with the others and decide to enjoy the Magic Festival taking place. When Lidia discovers the portal to Alfheim, he follows her and Reina through it, unknowingly leading Viceroy Hellmod to the very place he sought.[10] A battle ensues and Loki is forced to face off against another fellow Assassin of the Cross.[11]