Luoyang is a faraway country of strange culture and customs. It is accessible by way of ship from the port of Alberta.

In all versions of Ragnarok Online, Luoyang is misspelled as Louyang, which carries a much different meaning and pronounced differently as well.

Luoyang is embedded within a mountainous region surrounded by forests.

It is the height of Rune-Midgarts's Golden Age of Exploration after the discovery of Amatsu and Kunlun, and pioneer fever swept the Rune-Midgarts Kingdom. Adventurers dreamed of finding new lands, fame and fortune, and of being handsomely rewarded by their ruler, the wise and benevolent King Tristan Gaebolg III. Luoyang is one of the new lands that was discovered by brave adventurers from the Rune-Midgarts continent. As soon as it was found, it captivated explorers for many reasons. Rumor says that an enormous amount of treasure, comparable to that in the Schwarzwald Republic, lies hidden in Luoyang. The city of Luoyang also had its own unique products, invented by its people, that cannot be found in any other land. However, unlike Amatsu or Kunlun where foreigners are welcomed, a considerable faction in Luoyang ostracized outside cultures in order to protect their own unique culture. 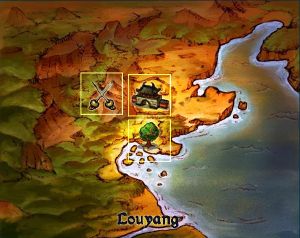 World map of Luoyang as seen in RO.

Before the existence of the Wu Lin organization, Luoyang suffered for many years from frequent invasions of evil creatures. Then 40 years ago, Bai Long the "Street Knight" used his strength and leadership to gather many warriors to form the Wu Lin and was able to turn back the invading monsters. Together with his comrades, Bai Long's valiant efforts brought peace to the city and the people of Luoyang made him their leader. However, as the glory of his youth faded, so did the peace that was enjoyed in Luoyang. As Bai Long aged, many warrior factions began to compete with one another, each of them plotting to take over Luoyang from Bai Long. With dissension among the warriors, the monsters were once again able to advance towards Luoyang.

Lamenting over the Luoyang warriors that were now fragmented by selfishness, Bai Long decided that he would welcome outsiders, so long as they were loyal and pure of heart, and gather strong fighters from other lands to wage battle against the monsters. Many middle-class people welcomed these foreign adventurers, recognizing the benefit of cultural exchange and new product imports, as well as the need to protect their city. However, the warrior factions and the older established families were unhappy with Bai Long's decision.[1][2]