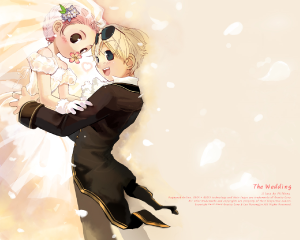 At this time, same-sex marriage is not supported in Ragnarok Online.

In order to marry in RO, both players must be at least base level 45, not be baby characters, and have the following items:[1]

Note: For players who are not VIP, instead of the Zeny requirement, both players must have purchased a Written Oath of Marriage. VIP players have the option to use either the Kafra Shop item or do the in-game requirements.

With all the items, head towards Prontera Sanctuary located in the northeast of Prontera. Speak to the marriage NPC to initiate the ceremony. Either the groom or bride can do this. The bride/groom who first registered must then have his/her future spouse speak with the same NPC within one minute before the application times out.

Once both parties have spoken with the marriage NPC, they can proceed to the front of the church where the priest will say a few words. He will ask both parties one final time if they wish to proceed; should both parties agree, the ceremony begins and the marriage is complete.

Afterwards, you both will be in your formal wear, and won't be able to attack or use skills for an hour. Your movement speed will be reduced for as long as you wear the Tuxedo and Wedding Dress. Many people decide to visit the honeymoon town of Jawaii, which can be accessed from an NPC near the docks in Izlude. You can also take advantage of the Adoption System, if you so choose. Also, if you are not happy with your spouse you can Divorce.

Before wedding skills can be used, the Diamond Rings must be transformed into Wedding Rings by being identified using a Magnifier. Once the bride and groom have equipped the rings, then marriage skills become available. The skills can be cast even if only one spouse is wearing a ring, but only the spouse who has the ring equipped can use the skills.[2][3]

In Niflheim, enter the house at (167,161) and go to the top of the stairs where there will be a Deviruchi. Talk to it and it will ask for 2,500,000 Zeny. If you choose to pay the amount you will become divorced from your spouse. However, this does not reset your adoption status. Therefore, if you have adopted another player: 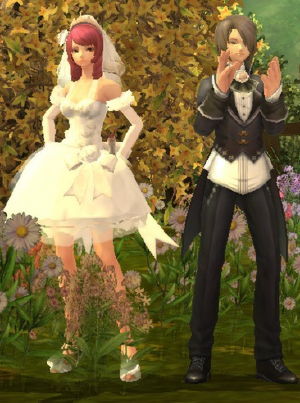 The wedding costume set in RO2.

A marriage system is rumored to be a future update as a render of Jawaii has been found in the game's client.[4] In addition, wedding dress and tuxedo costumes are available to players to purchase from the Kafra Shop.