No longer content with forging standard weapons, the Whitesmiths once again seek a way to expand their skills. Their quest for fame and fortune has lead them to Juno, and through research of the ancient Juperos civilization they discover a bold new technology - a fusion of magic and machine. Armed with this new knowledge, those elite Whitesmiths become Mechanics (Korean: 미케닉).

Versatile warriors capable of weilding Axes, or fighting with the aid of special robot suits known as Magic Gear. When equipped with the Magic Gear, useable skills and abilities change drastically. A Mechanic can no longer use any of his old Blacksmith skills while riding in the Magic Gear, but instead is granted with powerful long-range attacks and supportive skills... all at a price, of course.[1][2]

These drivers of Magic Gears, or Madogear, use various attack and complementary skills that are completely new to the world of Ragnarok. By configuring a variety of Magic Gear equipment items, Mechanics are highly flexible in terms of skill customization and character growth. A Mechanic's attack strength, defense, movement, attack speed, and complementary skills including Self Destruction are completely reliant on equipment sets. Therefore, the Mechanic can change character attributes anytime they want as long as they have the right equipment.

While the three states--the Rune-Midgarts Kingdom, Schwarzwald Republic, and Arunafeltz Empire--were on the brink of war, a Schwarzwald scholar invented a new machine from the bodies of the mechanical monsters from Aldebaran's Clock Tower and Juperos Ruins. He named this combination of ancient technology and magic "Magic Gear" and presented it to the entire world as the epitome of a new world power.

Infatuated with this groundbreaking technology, which was easier and more practical than the mysterious mana that was wielded by many but truly understood by few, many youngsters and researchers adopted the use of the new Magic Gear with great enthusiasm. People quickly came to call these drivers of the Magic Gear Mechanics.[3]

Only Normans are able to become Mechanics by trade. 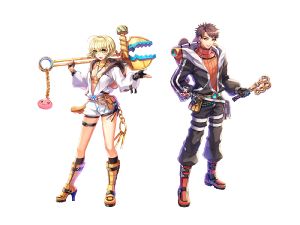 Mechanics can equip gear designated as:

Mechanics can utilize the following weapons:

Mechanics are the highest tier on this job branch and cannot advance any further.