Merchants are adventurers who are officially affiliated with the Merchant Guild. They learn how to earn an income out of buying, selling and dealing with items in general, and in some cases can use the power of money or the items they carry as an asset in battle.

Merchants grew up in wealth and knew only of money as the main goal in life. When King Tristan III of Rune-Midgarts announced the recruitment of adventurers, Merchants entered the world hoping to make a profit.

Merchant has various skills required for business and also possesses additional features that can be used with carts. Mammonite is a technique that usually attacks people by using money more than their lives are worth, has a great deal of damage, and allows for escape from critical situations.[1]

Normans, Elves, and Dwarves have been known to sell their wares to eager customers. 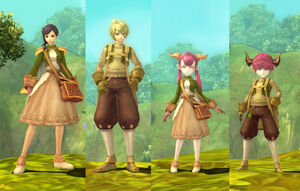 The Merchant costume as seen in RO2.

Merchants can only equip gear designated as:

Merchants can use the following weapons:

Merchants can go on to become an Alchemist or a Blacksmith.

Merchants do not appear as a job class in RO2. Instead, every playable character has the ability to vend on and offline. In addition, the Alchemist and Blacksmith job classes were revamped into secondary Life Jobs that any other Job Class can take on.