Monks are martial artists who use a combination of Holy magic and their fists to combat their enemies.

Some of those who walked the path of Acolyte, an occupation entrusted to Odin, insisted that not only spirit but Odin should be given to Odin. They invested the time and effort to sharpen their bodies rather than their minds, and finally they had enough of a powerful body to be called a weapon. Many have invested a great deal of time and effort into doing their good works for Odin, but having their tempered bodies have garnered fear and respect in the name of Monk. Rising in power with the mysterious abilities of the spirit and body, they were able to break everything that stood in their way with their strong stamina and powerful rehabilitation techniques. They now proclaim the will of Odin according to the decree of King Tristan III of Rune-Midgarts and the bishop of the cathedral, and declare the war with the riches of the world; it is time to exercise.[1]

As worshippers of Odin, only Normans can become Monks. 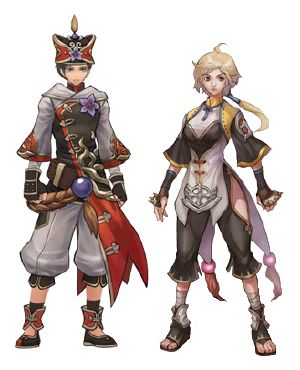 Monks can only equip gear designated as:

Monks can utilize the following weapons:

Monks can move on to become a Sura or transcend to Champion.

Monks can be further customized through the Master Level System.