Moskovia is a small rustic town filled with unassuming people who greet you warmly.[1]

On iRO, this place is spelled as Moscovia.

Moskovia is a large island with a small fishing wharf. 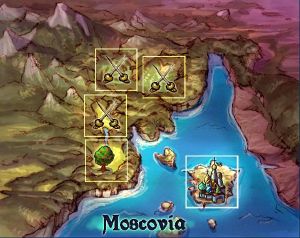 World map of Moskovia as seen in RO.

Moskovia follows a tsarist autocracy system of government, in which all power and wealth is controlled (and distributed) by the tsar (supreme ruler).

All quests in Moskovia require the completion of the Find the Moving Island quest.