Odin (Korean: 오딘) is the first and most powerful member of the Aesir. He is the one who slew the Jotunn Ymir and used the giant's body to form Midgard. Taking Ymir's heart, he shatters it into pieces and scatters them all over Midgard to help support its growth.[1] His sweat gave birth to the creatures known as Poring.

Those who worship Odin are part of the Church of Odin and mainly practice their religion in Rune-Midgarts. (Odin is commonly referred to as God by worshippers.) In Prontera, a fountain of him riding his horse Sleipnir was erected to honor him. A shrine was also built to pay respects to him, although it has fallen into disrepair over the years. 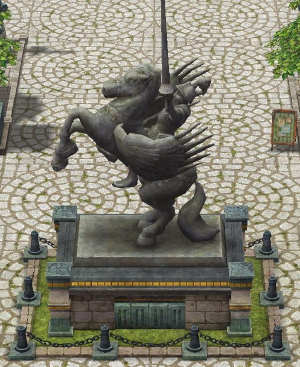 A statue of Odin wielding Gungnir while riding Sleipnir.