From Ragnarok Wiki
(Redirected from PUG)
Jump to: navigation, search 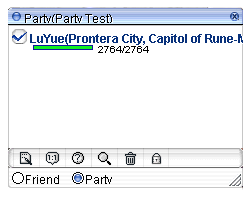 The Party window in RO.

The Party System is a system that allows players to group up and tackle dungeons, get through a dangerous area, or to simply travel together. Every MMORPG has a Party System that functions pretty much the same way.

In RO, a party can consist of a maximum of 12 players. You must have Basic Skill Level 7 to create a party, but there are no restrictions on joining a party.

To create a party, type into the Chat Box:

The player who creates the party is the leader. The leader can remotely invite people to the party by typing

To change the party leader:

Previously, if the leader decides to leave the party, leadership will not pass on to the next party member. A later update implemented an auto-delegation system in which leadership is decided by the system as follows:

To leave the party, type into the Chat Box:

NOTE: All members of a party must be within 15 base levels in order to share EXP gain. Otherwise, the party system will restrict the party to individual EXP earnings.

In RO2, a party can consist up to 5 members. There is no level limitation to start a party.

You can create a party by right clicking on other player's portrait and choosing 'Invite to Party' option. Alternatively, you can invite other players by typing in the Chat Box:

When in a party, EXP gain is automatically shared no matter what the level range of all party members is. As a result, the system will not allow players outside a certain level range of the party leader to be invited into the party.

In RO, there are 2 options for item distribution when creating a party:

Once the party is established, party looting options open up:

In the heat of battle, it's hard to keep track of what your other party members are doing. To aid with that, the party user interface (UI) is useful in letting other members of your group see your health status so they can quickly come to your aid before you can message them and vice versa.

In both RO and RO2, the Party Search system involves two functions:

The Party Catalogue allows you to see what parties are available for you to join. Once you see a party you're interested in joining, you can select the party listing and message the poster to get more information.

Note: In RO, you must click on the Search button in order to bring up all listings, whereas it's shown by default in RO2.

To post a Party listing, you can either click on the Invite link (RO) or the Post & Edit button (RO2) on the Party Catalogue window to bring up the party listing setup. (Alternatively, in RO, you can type /recruit into your Chat Box to bring it up as well.) In the setup window, you can pick what levels you're looking for, what job classes you want, and which area or dungeon you're seeking a party for.

A Pick-up Group, or PUG, is a group assembled on the spot for a quest, a PvP battle, or an instance raid. PUGs usually form when players are crowded around a particular dungeon entrance. As they're player-formed, PUGs can be found in both RO and RO2.

Exclusive to RO2 is the Dungeon Finder, which allows players to queue up for a dungeon and allow the game itself to compile the proper party for a dungeon run.