Rael (Korean: 라헬) is the capital of the Arunafeltz, serving as the nation's center for both politics and religion.

NOTE: Rael was revamped as Rachel because the æ character for Ræl was impossible to render in the game.

Rael lies in the midst of desert plains with a deep canyon bordering it to the northwest. Southeast of the city is the sea that separates the Arunafeltz States from the kingdom of Rune-Midgarts. 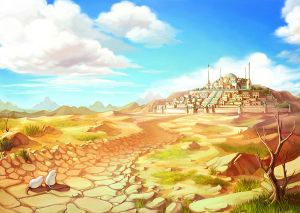 About a thousand years ago, Norman Alchemists from Rune-Midgarts went on a long religous pilgrimage to the region that is now known as the Arunafeltz States. The holy words of the goddess Freyja brought great change to the lives of the indigenous people living in Rael: they swore to honor and adore her, erecting an immense temple as her house of worship in their small, simple oasis village. The faith and fervor of Freyja's followers in Rael proved to be infectious, and the entire nation of Arunafeltz eventually converted to this new faith. Religion became central and foremost in the hearts and minds of the people, naturally merging with Arunafeltz culture and government, and Rael developed into a major, influential city.