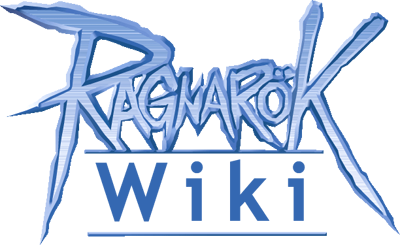 The Ragnarök Wiki is a wiki dedicated to compiling all the stories, characters, and events that are part of Lee Myung-jin's world of Ragnarök, covering the original manhwa and the online games that stem from it. Since the release of Ragnarok Online, the Ragnarök franchise has encompassed not only the original manhwa, but also various toys, games, and art books based on Mr. Lee's Ragnarök universe rooted in Norse mythology.

The current admins of the wiki can be found here.

The Ragnarök Wiki contains both user-generated content and information from official sources. The wiki is a flexible web-based database of information made up entirely of user contributions, utilizing MediaWiki software. All the text in the wiki is released under the Creative Commons Attribution-NonCommercial-ShareAlike 3.0 Unported license. The Ragnarök Wiki aims to provide accurate information based on the original source. Anything and everything concerning the manhwa and the MMORPGs, unless specified otherwise, is to refer to the original Korean publication and servers as publishers tend to localize and change the original content. If you see something that is out of date or incorrect, please create a Gamepedia account and help improve the information quality of the wiki.

In order to promote good faith and not take credit for information not written by Gampedia users, we strive to make an effort to attribute iRO Wiki's and other approved fansites' information on the Ragnarök Wiki out of respect. If fansite admins and users want the removal of their content, it will be done. Our intent is not to plagiarize, but to allow the information from those fansites to continue to be available should those websites go down for any amount of time or shut down entirely.

The Ragnarök Wiki was originally created on 2009 July 23 at Wikia by founding user Kojirou as an information site for Ragnarok Online. For the next 14 months or so, the wiki attracted little to no contributors before being completely abandoned by the founder in September of 2010.

The wiki remained untouched until November of 2012 when Grey Lurker began adding manhwa and animation information to the site, expanding its focus from just the online game to the Ragnarök franchise.

Since the appointment of the new admin, the Ragnarök Wiki has grown from 25 articles to 6,910 articles, covering anywhere from characters and monsters to quests and items. The number of contributors have also expanded since the wiki was advertised on the WarpPortal Forums.[2][3]

On 2016 August 24, Mathspy agreed to merge the Ragnarok Online Wiki with the Ragnarök Wiki due to both wikis covering generally the same information and then some. As such, Mathspy now directs his contributions to the Ragnarök Wiki as a content moderator.

On 2018 September 6, ZeroTigress decided to dial back her contributions to the Wikia site in favor of the Gamepedia branch of the wiki. Her presence on the Wikia branch became that of a purely supervisory admin with no enforcement of page standardizations.[4]

Ragnarok Wiki is owned and hosted by Curse.com, and has no affiliation with Lee Myung-jin.

Ragnarok Wiki is administered by the Community Administrators, with the guidance of the Curse.com wiki team.