The Ragnarok World Championship, or RWC for short, is a grand final tournament deciding who are the best players among all Ragnarok Online users in 77 countries around the world, one of the biggest scaled competition in the global game business.[1] 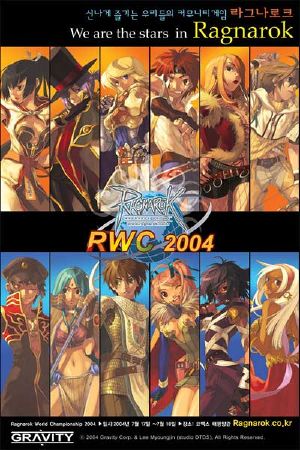 Grandyoukan's illustration of RO's job classes for a RWC 2004 poster.

The first tournament was held in 2004, approximately 2 years after RO's official launch in 2002. The RWC has since then been held annually without fail, garnering much fame within the RO global community.

RWC was cancelled for the very first time in 2014 following lack of funds for all official servers to participate in the finals in 2013. It remains to be seen what will become of this RO tradition.

Each official RO server hosts its own tournament to determine which 7-player team will represent them at RWC. The following lists the pre-RWC competitions held in each server.

After each server's teams have been decided, the players will physically be flown to the predetermined location of the actual RWC where they will take on other teams using unmodified computers in order to prevent hacking and cheating.