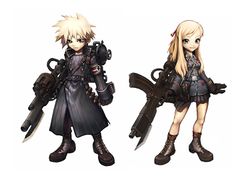 Recruit concept art for RO2: The Gate of the World.

A job that shows Normans' advanced science of civilization. Unlike other professions, Recruit utilizes the most steampunk gun to defeat the enemy and to fight the most Normans. It requires fast reaction, precise aiming, and good eyesight. You can demonstrate the power and skill of the Norman civilization not only in distance but also in long-range attacks.[1]

Normans are the only race that can become Recruits.

Recruits can only use armor designated as:

Recruits are only able to use the following weapons: