The Corporation has spearheaded numerous researches and technological breakthroughs for years. These include the development of the Strahlenstein steam engine, which is being used for numerous tasks all throughout Schwartzwald, and the Airship, which has become a major form of interregional transportation in Midgard. But one of their most famous and controversial work is their research on the secrets of life, which resulted in the development of the Guardians – Midgard's first artificial life forms - said to be much stronger than any Norman.

A castle guardian developed by Rekenber.

The Rekenber Corporation was established 400 years ago, around the same time as the founding of the Schwarzwald Republic. They began as the Zenit Zerter Lighthal Research Center, named after their first chairman.

In A.W. 560, the new chairman Mr. Rekenber renamed the organization. He expanded the corporation's purpose and founded the Regenschirm Laboratory to continue the company's original scientific research purposes.

In A.W. 700, Varmundt joined the Regenschirm Laboratory. It was his work in science that enabled the Rekenber Corp. to grow into the nation's biggest company.

Rediscovering ancient technologies has been key to the corporation's success. The group consists of 3 members currently studying Rune-Midgarts' history. 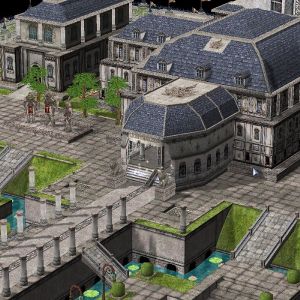 
In the pursuit of knowledge, Rekenber will search the Rune-Midgarts continent for ancient relics. We hope to make significant scientific progress by learning the secrets of the past. By making scientific headway, we hope we can improve current technologies to provide more convenient and affordable services in the Schwarzwald Republic.

2. The Commitment
Although magic and the power of the gods have always maintained an aura of mystery and superstition, Rekenber hopes to understand these forces from a more logical standpoint. Our goal is to make the lives of our customers easier and more enjoyable by making the ancient power of the gods more accessible by means of new technologies.