Rin is the Assassin Cross tasked with protecting the life of a man by the name of Mr. R. She is more easygoing than her fellow Assassin Cross Kidd, but can get serious when the situation needs to be.

In other versions of Ragnarok Online, this character is known as Lin or Lynn.

Rin's commanding officer Valdes assigns her with an adventurer to assist her in protecting a client who goes by the pseudonym Mr. R. to protect his life. Upon meeting Mr. R. the man frantically demands that he be allowed to return to the Juno library to retrieve the important documents he left behind. Seeing his anxiety, Rin suggests that the adventurer retrieves the documents on his/her own while she stays behind to watch Mr. R.

The adventurer returns with the documents some time later, much to the relief of Mr. R. Wanting to kill two birds with one stone, Rin asks Mr. R. what can be done in order to both protect him and find out what happened to the missing children. He suggests that the four elemental crests that surround Morocc should be strengthened by enchanted stones. Rin is suspicious, but agrees to have the adventurer do the task while she continues to protect Mr. R. As she does so, she sneaks a hidden message within her speech.

I'm sorry that WAIT you've got to do this FOR ME alone, AT but this situation can't be THE helped. STAIRS

At the stairs the adventurer is surprised by Rin who tells him/her that she doesn't trust their client, but that they'll go along with his requests for the time being. She advises the adventurer to report any suspicions to her and bids him/her farewell.

While the adventurer goes to "stabilize" the elemental crests, Rin heads to the Morocc Inn to meet the local historian (Rodafrian) in order to find out more about the crests. In her haste, she scares the historian, causing him to refuse to divulge any information to her. When the adventurer returns, Rin asks him/her to speak to the historian in her place and inquire about Thanatos Tower to see if there's a connection between the two. The adventurer reports his/her findings to Rin, who feels unnerved by the information. The two of them then return to Mr. R. to determine their next course of action.

Mr. R. requests that they investigate Thanatos Tower to see if there's any substance to the Surt legend. But before they do anything, Rin questions Mr. R about the people who attacked him and about the elemental crests. Mr. R. responds that he has no idea why those people attacked him. He also states that the elemental crests were forged by a madman bent on reviving Surt. But once the madman was found out, the crests were modified to further shield the seal on Surt. Hearing this, Rin later speaks to the adventurer privately and says that he/she should go investigate Thanatos Tower.

After the adventurer returns and reports to Rin, Rin begins to suspect that Mr. R. may be the target for Kidd's mission. She goes off to talk to Valdes while the adventurer checks on Mr. R.

Valdes reveals to Rin that he had no idea the two missions were connected and that he only accepted both of them in the hopes that they may reveal where the missing children disappeared to. Before Rin could ask Mr. R. if his assailants were members of the Dandelion Organization, the magic shield on the bar was deactivated and the adventurer reports to Rin that Mr. R. has disappeared. Valdes orders Rin to gather up everyone in the Assassins Guild while the adventurer is sent to find the source of the loud voice booming through the area.

Rin eventually encounters Kidd in the deepest dungeons of Morocc castle and learns that her client was none other than Raiyan Moore himself. Raiyan then tries to use Rin as a sacrifice for the ritual, but Kidd manages to push her out of harm's way. With no other choice, Raiyan summons a legion of demons to cover his escape. Rin tries to go after him, but is held back by the looming demons. At that moment, the members of the Assassins Guild arrive and begin taking down the demons one by one. Both Kidd and Rin's adventurers are wounded in the chaos and Kidd suggests they retreat while the rest of the Assassins Guild takes care of things.

Regrouping back at the Morocc bar, Rin chastises herself for letting Raiyan get away and allowing her adventurer to be injured. Kidd tells her not to blame herself and that none of them could've known about this diabolical plan. Rin tells Valdes that she needs to leave immediately in order to track down Raiyan. Valdes respects her decision and lets her go.[1] 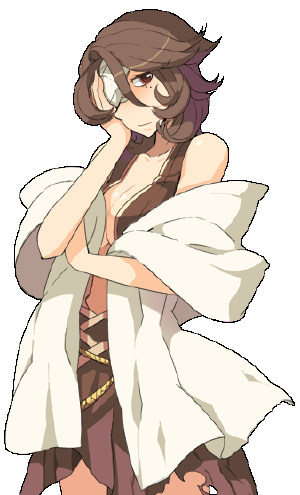 Rin in recovery from being attacked.

Rin manages to track Raiyan down to an area near the Abyss Lake area in the Schwarzwald Republic where she was ambushed by Dandelion members. She put up a good fight, but not without sustaining heavy injuries herself. During the scuffle Rin slips and gets knocked out, after which a mysterious adventurer appears to fight off the remaining Dandelion members. She later awakens in the secret Assassin pub in Morocc where she's been recovering since. It is there where she eventually meets another adventurer that was sent by her colleague, Kidd, who was busy investigating in the Ash Vacuum without her. Rin receives the message from the adventurer and asks the adventurer to go investigate the area where she got attacked to find clues while she works on a report to send back to Kidd. The adventurer returns some time later bearing a Bloody Crystal of Darkness and shows it to Rin. The Assassin Cross is surprised to see that was all the adventurer was able to find and requests the adventurer to take both the crystal and the Morocc Trace Log back to Kidd.

Some time later, Kidd shows up at the pub with none other than Raiyan Moore himself. Kidd leaves the interrogation to Rin as he was to meet back with his adventurer assistant at the Alliance camp. She is later joined by Kidd's adventurer assistant who had come to deliver the Morocc Trace Log back to her. While interrogating Raiyan, the adventurer remarks why the man is acting completely differently from when Kidd apprehended him. Rin responds that Raiyan is probably suffering from a split personality disorder and that the man in front of them is the original Raiyan.

Suddenly, Raiyan becomes increasingly violent as he tries to fight his evil persona from within his mind. To prevent another berserk outbreak, the adventurer strikes Raiyan. In the process, the Bloody Crystal of Darkness dislodges from the adventurer's possession and Raiyan uses it to escape from the both of them. The adventurer is worried that he escaped, but Rin tells the adventurer that she already placed a tracer on Raiyan beforehand. She tells the adventurer what the tracking code is and instructs the adventurer to give that information and the Morocc Track Log to her boss Echinacea back in the Ash Vacuum.[2]

Some time later, Rin and her comrades discover that Raiyan Moore was found in Eclage by a Laphine. When they arrive there, Raiyan was of his own mind and explains to them everything he's discovered about the dimensional gap. Using what he told them, Rin helps set up the dimensional devices around Jotunheim and the Bifrost area to create travel portals. She since remained at Eclage to watch over Raiyan, feeling bitter that she can't punish him for unleashing Surt as he's become a valuable source of information. She sends for Kidd's adventurer assistant as he/she has a right to know why Raiyan caused all of this to happen.[3]