Royal Guards are an elite order of Crusaders and Paladins that originally served under King Schmitz of Glastheim. King Schmitz knew that to defend his kingdom from the terrors and chaos of the world he would need a special defense unit that answered only to him. That is how the Gryphon-riding Royal Guards came to be.[1]

The Royal Guard has much stronger armor, allowing the accumulation of a lot of damage by attacking enemies, and has integrated a lot of skills using spears and shields. In addition, when a large number of Royal Guards are in a party, they have a more effective position in relation to other players in the vicinity, such as receiving a bonus to their attack power and defense ability according to the number of Royal Guards. This allows them to act as a defense tower in battle. The Royal Guard skill "Inspiration" (Spirit Response) is a skill that temporarily gives the power of Odin to oneself and receives all stats, ATK, and HP bonus; a feeling similar to Lord Knight's "Berserk". However, since it is hard for the Norman body to bear the Holy Spirit within, it must endure the side effects and risks associated with it.[2]

The Royal Guards were established three centuries ago in the year A.W. 711, under the rule of King Schmitz Von Walter. King Schmitz was ahead of his time and knew that he must prepare a special force to deal with the ever-present threat of attacks from his enemies and national chaos. He organized an elite unit under his direct command around the time Glastheim was built.

Knights, Crusaders, and Paladins were welcomed into King Schmitz's court as he had a military background and they in turn worshiped his charismatic leadership. When he announced the formation of his elite unit, all of them gladly volunteered to join. His unit consisted of the best Crusaders and Paladins and they were called the Royal Guards. They developed and employed exclusive combat skills that were passed down only among them.

Despite their position as Royal Guards, they never hesitated to lend their power in any military deployment and monster subjugation party. Their name became synonymous with terror among their enemies, thus strengthening King Schmitz's influence over his country as well as the enemy states.

The Royal Guards, however, also incurred the hatred of other military organizations in the kingdom due to their unconditional loyalty to King Schmitz. When the king mysteriously disappeared, they slowly and surely fell apart under the resulting political pressure. Before the Royal Guards were officially disbanded, the remaining members voluntarily left the kingdom after hiding their books and records of their secret combat skills.

The people eventually forgot about them and the Royal Guards haven't been mentioned in ages.[3]

Royal Guards are known to be Normans, as they were established by such. 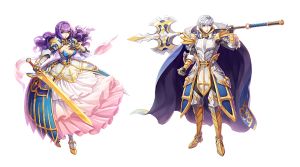 Royal Guards are the highest tier in this job branch and cannot advance any farther.

Royal Guards have exclusive mounts designated for them. Unlike other classes, Royal Guards can attack from their mounts. The main mount is the gryphon.