Rune-Midgarts is a vast southern kingdom that contains many city-states. Its capital is the city of Prontera.

The English release of Ragnarok mistranslated this country as Volsug. On iRO, this kingdom is often referred to as Rune-Midgard due to translation inconsistencies.[1]

The empire is ruled by King Tristan Gaebolg III. It spans the east side of the Midgard continent. The kingdom follows the Odin Orthodoxy and includes the land south of the Mt. Mjolnir range.

Various cultures have developed over the years with the help of the love of freedom the people have. The annual martial arts festival, held in the honor of their god Odin, is a famous event of Rune-Midgarts.

The kingdom is governed under two separate systems: the several different tribal and city nations that were unified are governed by a feudal lord, while the rest of the kingdom is ruled directly by the king.

Recently, word has it that the eastern nation Arunafeltz, which worship the goddess Freyja, is training and gathering a strong army. In response, King Tristan has encouraged the activities of Knight and Wizard guilds. The Emperium has appeared in front of many, bewildering King Tristan, as it is believed to appear only when the leader is going through hardships. He is also anxious about the thought that there may be someone behind all the strange activities.

Rune-Midgarts has an alliance with the Republic of Schwarzwald.[2] 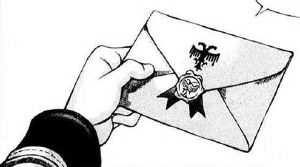 The insignia of Rune-Midgarts on an official envelope. (manhwa)

The monarchy of Rune-Midgarts is to be succeeded by the most promising of the 7 royal families:

The quality of the representative princes has to be appraised by the royal families. One is then elected by internal ordinance known as the Ritual of Blessing. However, due to the recent resurrection of Surt, the kingdom is changing the way it picks a new king and is allowing experienced adventurers to evaluate the candidates. 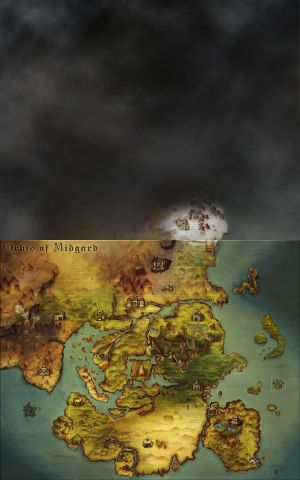 Long ago, Jormungandr appeared and brought chaos to the continent. Seven warriors appeared and drove the serpent away, saving Midgard. With the return of peace, the 7 warriors established the Rune-Midgarts Kingdom and chose Tristan Gaebolg I as the kingdom's first ruler. Seven royal families, each descended from one of the 7 warriors compete for the Rune-Midgarts throne to prevent royal corruption.

In A.W. 995, Fenris' sealed memories were released, prompting her to begin her search for Baldr's reincarnation. Two years passed before Fenris finds the god's reincarnation, who goes by the name Chaos.

In A.W. 997, an attempt was made to free Surt from his prison, but was thwarted by the efforts of the Assassins Guild.

By this time in the continent's history the satellite town of Izlude was formed and Morocc was destroyed by Surt.

It is assumed that around A.W. 1000, Chaos and his friends manage to defeat Freyja and her valkyries, sealing Freyja away in her homeworld of Vanaheim. Thus putting an end to the Age of Gods and beginning the Age of Man. (Day of Despair)


After the destruction of the Day of Despair, the Rune-Midgarts Kingdom as a whole was no more. In the aftermath of the Ragnarök catclysm, one lone individual known as Ignatz Gaebolg set about rebuilding the kingdom. He soon became chosen as the first king of the revived Rune-Midgarts Kingdom in the Neu Era. 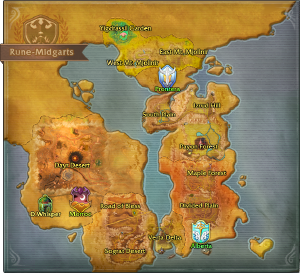 As time passed by, an opposition group have begun to form under the King Eckhart's ruling. The opposition group's goal was a revolution, to oust the royal family line kingship and appoint a capable individual as the ruler. The members of the group were members of aristocrats who were in charge in handling the state affairs, which allowed them to quickly corner King Eckhart.

Just then, a woman by the name of Lissur Anailuj successfully stopped the aristocrat's disturbances with the help of other aristocrats and helped set the kingdom back on the right track. As a direct result of this, the opposition group have lost the other aristocrats' backings and ended up creating a giant opposition team to fight against the king, Lissur and their sympathizers.

King Eckhart goes missing after taking the royal guard captain and the knights beyond Mt. Mjolnir to scout the demons' movements. King Eckhart possessed the holy sword, Balmung, that he inherted from King Gaebolg. Losing both the King and the royal treasure proved to be a critical blow to the kingdom. In order to quell the growing uneasiness within the kingdom and keep the opposition in check, Queen Camil (the queen) decided to appoint a new king, Reinhart Gaebolg. Queen Camil was exceptionally well versed in politics and offered advices to the King Reinhart. With the combination of the queen's support and his own capabilities, King Reinhart was able to calm the citizens and secure the throne.

Not long after Reinhart Gaebolg was crowned the king, former royal guard captain, Kirk Graham committed suicide. After his death, a shocking truth was revealed. Kirk Graham was behind King Eckhart's disappearance and he had been assassinated by the royal guard captain. However no one realized that the true mastermind behind the incident was the Freyjanity.[3]