Rune Knights (Korean: 룬 나이트) practice a new type of magic derived from Rune Stones. Although magic from Rune Stones can be casted very quickly and does not consume SP, Rune Knights can only carry so many Rune Stones at a time and they need many materials the create different kinds of Rune Stones.[1] A Third Class job, Rune Knight utilizes a concept of <Magic Check> in being able to utilize both magic and sword at the same time. It is a character that can enchant with a powerful attack by strengthening abilities with Rune Stones. Instead of the existing Pecopeco, Rune Knights can ride Dragons and have skills that can only be used when riding a Dragon.[2]

NOTE: The initial design of the Rune Knight was based on Chaos from the Ragnarok manhwa. For some reason, the job class was redesigned to resemble the art done by Lee Myung-jin of an advanced Lord Knight soon after the release of the initial design. Reception from the playerbase is mixed on both designs, but many RO websites and fansites use the original Rune Knight design on their job class pages regardless.

The beginnings of the Rune Knight began with a group of Knights that were traveling through the Ash Vacuum and encountered a Sage that passed on his knowledge of runes to them. As they grew to understand runes, these Knights started to feel the flow of mana like Magicians. They infused Rune Stones with mana so that they could wield this new kind of magic in battle.

Surprised by their new powers, these Rune Knights extended their stay in the Ash Vacuum to practice their use of Rune Stones and keep their runic skills secret from others. However, it didn't take long for worldly adventurers to learn about the Rune Knights and their magic since the new passage to the Ash Vacuum was opened.

The Rune Knights, whose power is beyond the world's knowledge, finished training in the Ash Vacuum and returned to the Rune-Midgarts Kingdom and the Midgard continent to use their rune magic to restore order to the world.

During the recent Continental War at the connecting point of the Ash Vacuum and our world, the legend of the Rune Knights spread quickly and many Knights have sought to join their order.[3]

Normans are the only race that can become Rune Knights. 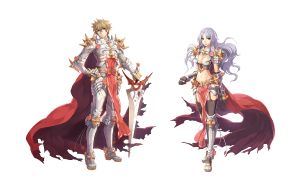 Rune Knight can only equip gear designated for: 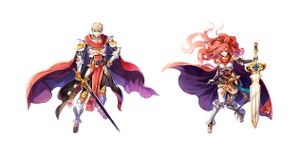 The jRO redesign of Rune Knight, making this class the most redesigned class of all RO classes.

Rune Knights are on the highest job tier in the game and cannot advance any farther.

Rune Knights have exclusive mounts designated for them. Like other Swordsman classes, Rune Knights can attack from their mounts. The main mount for Rune Knights is the Ferus.

^The process to gain access to Feruses of other colors is unknown.