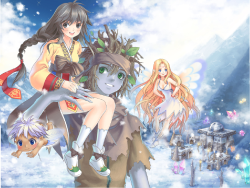 Saphas are a proud tribe of wood Jotnar that reside in Jotunheim. They have a very short childhood, becoming adult after the first 10 years of life. From there, they can grow to be very old, but can never die from old age. As such, Saphas can only die from getting killed.

On iRO, this race is localized as Safa.

Saphas are descendants of Hvergelmir that established themselves in the flood of Ymir's blood. They eventually developed a chronic illness that causes them to petrify over time like an old tree. They discovered the injection of refined Bradium slows the progression of the disease and thus became reliant on the ore for survival. But they know that the supply of Bradium in Jotunheim won't last for long and are constantly seeking alternatives for their descendants' future.

In recent times, the Saphas have become embroiled in a war with Laphines after the fairies began attacking one of their mining operations near Manuk. They have reportedly killed at least one Laphine and currently have another imprisoned in Manuk.

Saphas mainly feature greyish skin that can be paler in tone. They are much taller than Normans and have wood branches growing out of their head instead of hair. There doesn't seem to be distinctive genders within the race, given their tree-like properties. It may be possible that Saphas are monoecious.

Sapha language does not have a particular name for it. At this point, the majority of the language is very indecipherable without the Ring of the Ancient Wise King.

Sapha society is very communal in that they believe that everyone must contribute for the good of the race as a whole. If something needs to be done, there will always be someone to do the job. As such, Sapha society utilizes a caste system so every Sapha has a place and purpose in the community. It is unknown if the caste system was rigidly enforced or if Saphas were allowed to move up the caste system regardless of their standing in society.

Jerutes are ministers charged with maintaining law and order in Sapha society. They also work as representatives when making connections with outsiders. Although Saphas are "ruled" by a (prime) Jerute who serves as a beacon of wisdom, power is distributed evenly among all Jerutes for optimal balance of power.

On iRO, this job class is localized as Jarute.

Knitts are special field agents that deal directly with civilians.

Galtuns are the guardians and soldiers of Sapha society. They keep the peace, enforce laws, and protect their fellow Saphas from harm.

On iRO, this job class is localized as Kaltuns and Galtens.

Venknicks are general civilians that are a step above Pioms. They are divided into high class and low class Venknicks. Unlike Pioms that do manual labor jobs, Venknicks are more suited for office work like civil service manager and archivist.

On iRO, this job class is localized as Phioms.