From Ragnarok Wiki
Jump to: navigation, search
This article is a stub. You can help Ragnarok Wiki by expanding it. 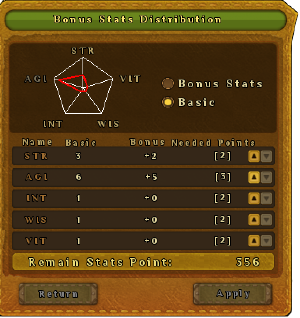 The Stat window in RO2.

The maximum amount of points players can put into any one stat is currently 50.

Strength: This stat directly increases your physical damage, allowing you to deal damage even if you don't equip any weapons if you invest a sufficient amount of STR.

Agility: Increases your attack speed and chance of dodging. (On seaRO2, this stat is known as Dexterity (DEX) for some reason.)

Vitality: This stat determines how much damage you can take in battle. Increases HP recovery % of potions.

Intelligence: Primary stat for spellcasters, this is used to increase their MATK and MDEF.

All Rates are determined by this formula:

Because of this, Rates decrease as you level.

Hit Rate: Accuracy; increases as you level such that your base Hit Rate will be 95% against monsters at your level.

Critical Hit Rate: Critical hits and heals do twice as much; increased by AGI.

Evades damage entirely; increased by AGI and some blue/purple equipment.

Halves damage taken; increased by STR/INT and some blue/purple equipment.

Each 2nd Job Class in RO2 now has a stat bonus to help boost their individual abilities: